During the week of Labor Day, we hopped on a plane to St. Martin for a relaxing getaway. The trip started off on a good note when we were bumped to first class on our US Airways flight and had the most wonderful flight attendant (Judy) waiting on us on our 3.5 hour flight to SXM. 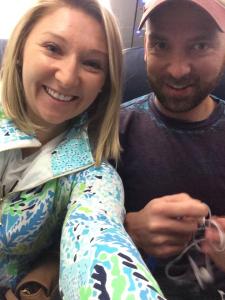 Since the planes land on the Dutch side of the island (St. Maarten), we got a tour of island in our taxi ride to our resort – The Grand Case Beach Club. It was nestled between picturesque mountains and turquoise water right there on the beach (or two beaches: Le Petit Plage and Grand Case Beach).

We had a stunning view of Creole Rock, and even spent one afternoon snorkeling there with some amazing rainbow parrot fish, eels, and about a gazillion more caribbean fish species. It was some of the best snorkeling we’ve ever done. 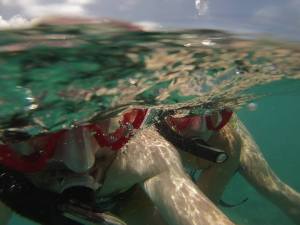 Our resort offered kayaking, sailing, stand up paddle boarding (SUP) and snorkeling right off the beach, too. We spent an entire morning exploring the gorgeous water in front of the hotel and just for the record, I only fell off my board ONCE. (Fact: SUP requires some serious balance and core strength, and your feet will hurt afterwards from holding on).

Each morning we went to the restaurant on site for our continental breakfast. My favorite was of course the chocolate croissant. I actually took my Shakeology with me on this trip so that I could remain somewhat healthy (and I embarked on my attempt to be vegetarian for a month on 9/1). Listening to the waves was so tranquil and such a relaxing way to start our mornings.

We ventured into Grand Case (the best culinary experiences on the island) for dinner most nights. Our favorite spots were Le Cottage and La Villa, although we also had a lovely creole experience where the chef was also the owner and took plenty  of time to come out and just chat with us. The food was nothing short of spectacular on this trip. 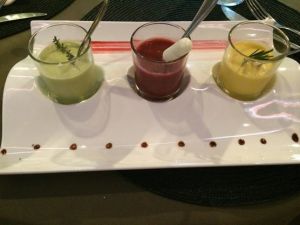 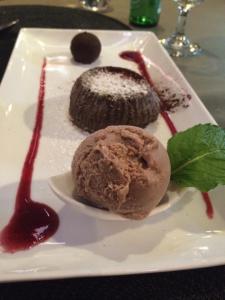 We ventured out to Orient Bay Beach one day, which is the famous nude beach on the island. However, since we were there in September, it was the “off season” and all the nudists stayed home. We pretty much had the run of the place while we were there and dined at an excellent beach restaurant before setting up in some chairs just steps away from a bar for the rest of the afternoon.

Our resort was totally gated and had security guards walking around at all times which made it feel very safe. We were upgraded upon arrival there to a suite style condo with bed/bath upstairs, and living room, kitchen and another bathroom downstairs. Our patio led right out to an overlook over the beach (the stairs were no more than 5 feet away). We also had an upstairs balcony which provided amazing views of the island. The pool at the resort was one of the prettiest set ups I’ve seen, just dreamy! 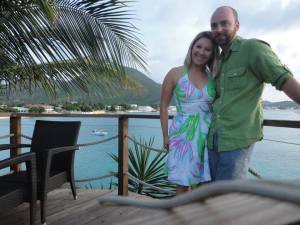 While we’re talking safety, nothing happened to us while we were there but upon asking advice on a couple trips we were thinking of taking on our own, I was told, “Just don’t take anything with you.” There was also a “theft insurance” charge for renting cars on the island and parts of it were not very well lit. That being said, the locals left us alone. Only once (on Orient Bay Beach) were we asked if we wanted to purchase something. Philipsburg was more touristy and probably the least safe place we went for that reason. 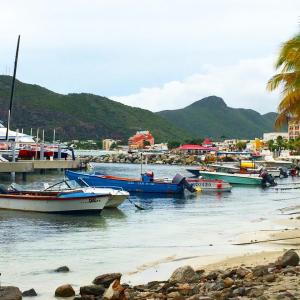 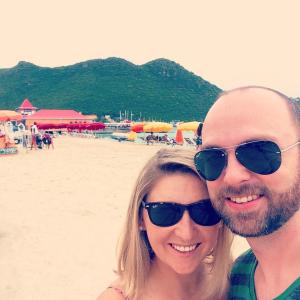 In Philipsburg, we had lunch before walking around. It was gorgeous on the water. The shopping area was your typical Caribbean shopping area which owners out front asking you to come in and a few peddlers on the beach asking you to purchase their items. We didn’t spend TOO much time there before we headed off to Maho Bay beach to see the planes land. Since Maho Bay is also on the Dutch side where the casinos are, we popped into one while we were there. My (risk adverse) husband won while playing poker and immediately quit playing, so we weren’t there for more than 45 minutes before we headed back to Grand Case. 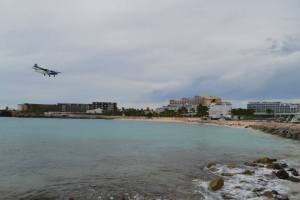 Their signature drink on the island is the Guavaberry Colada since they have a guava berry rum factory on the island. Each restaurant offered their own specialty after-dinner (or lunch) rum. Some of the flavors we tried were caramel, banana, coconut and a delicious mixture of coconut rum, grenadine and pineapple juice. 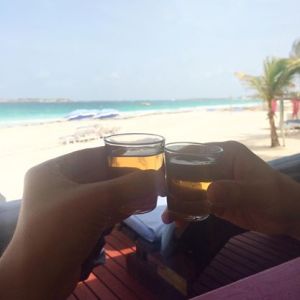 We very much enjoyed our trip to St. Martin and would recommend the French side to anyone going to visit. However, if you’re still deciding where to visit, our vote is Aruba. Aruba is still our favorite island. The friendliness of the people is unmatched (and they’re all so incredibly intelligent). Not for one second on the island did we feel unsafe, even when we walked or biked the .75 miles back from the high rise area at night. While Aruba has a desert climate and St. Martin has a tropical climate, we didn’t mind the heat and no humidity in Aruba. It never rains in Aruba (it only rained on us once in St. Martin). Aruba had happy hour which we loved, St. Martin did not. The food was amazing in both places but Aruba holds a special place in our hearts. If we had a free trip back to either of these islands, we would undoubtedly choose Aruba.

Life has been busy, what’s new? We have so many wonderful things that I’m dying to share (nope, not pregnant!), but can’t just yet. We have to let a few more things fall into place and then all news can be shared. For the time being, I’ll share that we are headed to St. Martin (French side, although we’ll definitely explore the Dutch side) to sepnd 5 heavenly days frolicking on white sand beaches, dining on 5-star French cuisine and celebrating a year of marriage. Hard to believe it’s been a whole year (in less than 2 weeks). St. Martin is our big trip for this year and we’re back on for our European getaway next year. We’re thinking Ireland – London – France will be a nice combo. For this year? #TheWhitesDoStMartin 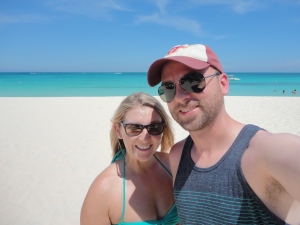 My husband has already been checking out restaurants for our trip. I’m leaving the planning to him on that, he always chooses so well. Our honeymoon in Aruba was full of delicious food!

First year anniversary gifts are supposed to be paper, so we’ll consider those airline tickets our gifts to each other. We’re much more into experiencing things together rather than purchasing physical items.

And before we head off to this spectacular Dutch/French island, we’ll be meeting our new neice, Andi, who is due to arrive on August 10th! Follow along on Instagram with hashtag #comeonAndi!

If you have suggestions of things to do/see or places to eat in St. Martin/Maarten, let me know! I always appreciate recommendations!