This weekend was a whirlwind, but a great one! Anytime we get to spend time in Blacksburg and Lane Stadium, it’s a good weekend. One of my favorite pictures of us is from the UNC/VT game last year in Chapel Hill (just after we were engaged). 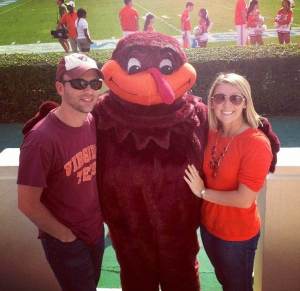 And here’s a picture of us from yesterday (just married!) at the UNC/VT game in Blacksburg (where the Hokies sought revenge for the beat down they took last year!).

Instead of the usual tailgate foods, we had breakfast foods since the game started at 12:30. We also planned for pumpkin beer and mimosas. I made a few quick and easy finger foods for us to pack into the cooler for our still-dark-outside departure. Each of my snacks consisted of only 3 ingredients and took about 20-25 minutes to make. Sharing the recipes for two of the items I made: sausage balls and pumpkin muffins and also “blueberry yogurt poppers” that I made for the first time tonight.

1 lb. ground sausage
1 lb. cheddar cheese (I did not use nearly a pound of cheese)
2 cups of biscuit mix

Mix all three items together and then ball into 1 inch balls and put on a baking sheet. Bake on 350 for 20-25 minutes (or until golden brown).  *They were good as-is, but I would add spices if I made again, or try to use hot Italian sausage or a spicy cheese.

Mix all items together and then spoon into cupcake/muffin pan. It’s a thick consistency so be patient with getting the tops smooth if you are a perfectionist. My darling husband helped with this part and later told me he liked the messy muffin look. Bake at 350 for 15-20 minutes.  *Cream cheese icing can be added to the tops but is totally unnecessary. These were DELICIOUS on their own (and SO easy!).

I also made mini-quiches for our tailgate but they were my least favorite and you can google an easy recipe for that if you’re really interested in it. The other recipe I’m dying to share tonight is one that my college neighbor shared on her blog (you should totally follow her blog!). 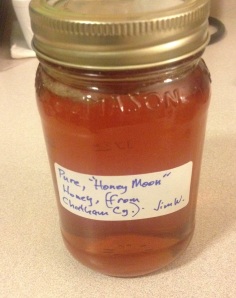 (We used honey that was a wedding gift from one of our wedding guests who has his own bees!)

Mix the honey in with the yogurt. Using a toothpick, dip the blueberry in the yogurt/honey combo and using a second toothpick, slide the blueberry onto wax paper. Repeat (with your entire carton of blueberries). Once you’re all done, put them in the freezer for 10-15 minutes. We’re excited to snack on these this week at work (can you tell I’m failing miserably at my no-dairy-no-dessert in October challenge?).

Would love to hear of other simple snack recipes that you have (preferably healthy but never opposed to deliciousness). Hope everyone had a good weekend.