Tomorrow makes 11 months that we have been married. Tomorrow is one year from the day that we drove out to our ceremony site and buried a bottle of bourbon (upside down, at the exact spot and time that we were to get married). Southern tradition tells you that you’ll have good weather on your wedding day if you do this (Southern tradition lied in our case but didn’t ruin the day!).

Having been almost an entire year, I’ve been sentimental and looking back at all of the photos leading up to our big day. Such as trying on dresses: 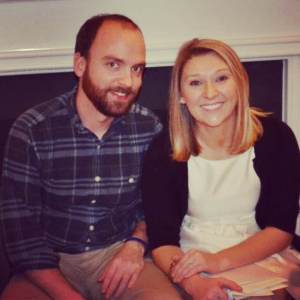 Bridal portraits in Blacksburg so I had a piece of “home” included in the wedding:

Rehearsing, and letting go of all of my stress the day before the wedding. Obviously, my groom wasn’t stressing either 😉 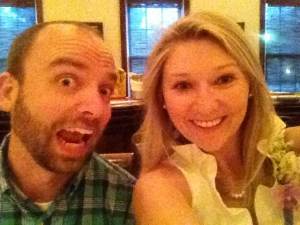 Hard to believe it’s been almost a year and we’re already planning a getaway to celebrate our anniversary. We’ve certainly had some high-stress times with my grandfather leaving us, buying a new home and finding renters for our other home, LW taking a traveling job, fostering puppies (this was only stressful for the hubs, the puppy breath made it okay for me!). And we’ve had some really amazing times going to concerts, museums, hiking, traveling to PA, MD, VA, IL, FL, MA… and of course Aruba, buying a 2nd home, eating at a gazillion delicious restaurants, running 5ks together, and enjoying being husband and wife. So grateful for the memories we’ve made and looking forward to a hundred more years of them, and having this guy by my side.

I might be a bit of a giveaway junkie, well, when it’s for something that I would otherwise buy. This week has been FILLED with giveaways for things like craft beer VIP tickets, books,  running shoes, Jack Rogers, and monogrammed EVERYTHING. Naturally, I have entered all of them and am patiently waiting for my name to be called (or in our new social world, to be “posted” somewhere). I’m happy to share these awesome giveaways with you so that you can have your very own chance to win!

Craft beer for you Charlotteans (or folks close enough to drive): Olde Mecklenburg Brewery is opening their new Brew Haus on 8/15. Your chance for VIP tickets, free beer for a year and fun with friends can be claimed here!

Southern Weddings magazine: (ends 7/31) monogrammed goodness, along with another shot at Jack Rogers! You definitely don’t want to miss out on this summer goody bag, enter here!

Marley Lilly monogrammed goodness: At Marley Lilly, you can decide what you want to put your initials on, or you can put them on everything! Enter here for $100 dollars to spend at Marley Lilly. Ends in 9 days!

I’d love to know which giveaway is your favorite and if you decided to enter! Good luck to everyone, hopefully you’ll be walking around in Jack Rogers with a monogrammed bag, necklace and beach hat and sipping on an Olde Meck Captain Jack next time I see you!

Hope everyone had an enjoyable 4th of July! We were fortunate to get to hang out with our friends, enjoy lots of sunshine and have a front-row seat for the fireworks (Thanks, Seth!). My husband wasn’t traveling this week since there was a holiday, so we got to spend lots of time together at home. We watched some funny movies, did some yardwork and took our boys to the Whitewater Center for a 3-mile hike. While I think his current job is a great career move, the boys and I miss him when he’s gone during the week and we’re thankful for the weeks when we get to have him at home with us.

On Wednesday (the 2nd), I did NoDa Run Club in the sweltering heat. I ended up running 3.75 miles which was pretty good for me because I haven’t been focusing on my running lately. I joined a new HIIT gym and am hoping to see results from it that I’m no longer seeing from running.

However, my love of running is pushing me to sign up for the distance challenge offered in Charlotte. It’s a combination of races, starting with a 5k and building up to a half marathon or full marathon. Clearly, I would do the half because I have no desire to do a full but I haven’t signed up just yet. Our boys donned their patriotic bandanas on our walks over the weekend and one obviously enjoyed it more than the other.

On the 4th, we went to the Plaza Midwood Pig Pickin’ with two other couples and their adorable children. The weather was absolutely fantastic in Charlotte, so we had the perfect day to be hanging out outside.

Grown up jobs, kids (not ours!), and busy lives in general make it hard to get together as often as we’d all like, but we’re so thankful when we are all able hang out. I’m especially thankful for the friendship that these girls offer and that they live in Charlotte. Having had the same “best friends” for most of my life and not having any of them in Charlotte was tough when I first moved here; finding awesome friends who share common interests made the transition much easier! 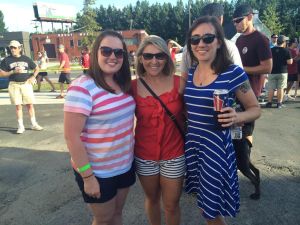 LW and I wore our most patriotic outfits for America’s birthday. This was the 8th photo that was taken of us before we finally nailed one where we were both smiling.

We headed over to our friend’s condo uptown as it started to get dark. We were given a front-row seat to the fireworks from his balcony. We arrived with Prosecco, chocolate chip cookies (with M&Ms) and patriotic cheesecake squares (I added blueberries for a red, white and blue treat!). We got there in time to see this stunning sunset over the new Knights stadium.

The fireworks show was incredible. There were several times we thought it was over and then a new round of sparkly explosions would occur. The flood of people in the streets and from the stadium was incredible. We could see fireworks beyond the stadium as well, all over the city and surrounding areas there were pops of lights on the horizon. It was absolutely amazing – especially from that vantage point!

And I can’t forget to share this photo of two of my favorite people in Charlotte. Seth moved here around the same time as me (6 years ago!). He’s been such a good friend to me over the years and never fails to make me laugh. He introduced us to Scott and we quickly learned that Scott is also awesome and quite the chef!

We managed to pack a ton of fun into our week and weekend together and I wouldn’t change a thing. We ate at several of our favorite local restaurants, went to a baseball game, and spent time with friends which was one of our “resolutions” for the new year (to do MORE of this and not say “no” when someone asks). Back to the grind today and waiting for the next holiday week…. is it Labor Day yet?